Skip to content
Nothing says spring quite like bluebird, elevated backcountry days. So as March drew to a close, Emerson and I snuck in our first 14er summit tour on Quandary Peak.
We arrived to a busy trailhead around 7:30am on a Saturday and were moving on the trail by 7:45. Up to tree line, there were only two short, patches of rocky dirt that we had to unstrap and walk across for. The weather was pretty perfect: clear, no wind, and pleasantly cool following a week of record hot temperatures (climate change is real, and if you want to do something about it, go here or here).

For those who haven’t done Quandary Peak before, my Suunto tells me the first ~1.3 miles is a mild uphill that takes you up ~660ft to 12,177ft. That leaves you around ~2,100ft to gain in the next 1.7 miles. Quandary isn’t sneaky and cruel with false peaks. Once you’re above tree line, the two major inclines you can see are pretty much it. As a sport analogy, Quandary Peak is a second half team that lacks flash but possesses solid fundamentals.

The crux incline starts around 13,365ft. Here, the steepness combined with the wind-blown, still-solid-9:45am snow conditions made skinning difficult and we joined other skiers and splitboarders in bootpacking. Each step on the icy surface inspired no confidence but I imagine that it was (perhaps only slightly) less worse than skinning. Crampons would have been very helpful here. With the summit in sight, I humbly boarded the struggle bus and trundled upwards. 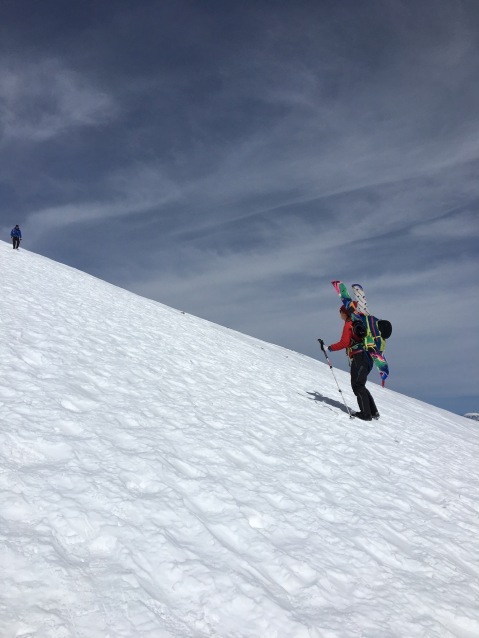 So close, yet so far

#imaedit
Soon(-ish) before noon(-ish), Emerson and I reached the summit and the struggle bus transformed to the party bus. As you probably know, Quandary is a particularly popular weekend winter 14er and today was no exception. Two bars each of what looked and tasted like condensed bird food later, the marquee summit ledge cleared up and we were able to snap a few “We did it!” photos.

After eating and insta-jamming, Emerson and I transitioned to ride mode. We walked back to the top of the east face, strapped in, and dropped in around noon. This first pitch down was crusty with a few nice, hidden powder patches. The words “manageably fun” come to mind. We kept the main trail out the right corners of our eyes and rode to ~13,200 where it flattened out.

After a mountain goat cameo and a super short walk across the flats to the next ridge, we dropped in again. At around 12,600, we veered to skier’s left away from the trail and into large, open bowl of corn-y snow!
At this point, our legs felt like elephant trunks but no matter. The beautiful views surrounding us and the softened snow conditions demanded our attention.
The last pitch led us into some trees and we meandered through, tacking right. Soon we shot out onto the road that goes straight back to the parking lot. With our poles out, we were able to snowboard/row the entire way back.
At around 2:45pm (exactly 6 hours later), we were peeling our stinky boots and layers off and throwing them into our car. With that, Emerson and I officially crossed “Ski a 14er” off our bucket list.

✅ Fresh snow ✅ Fresh sun ✅ Fresh views ✅ Fresh caped snow ninja dog
Back to back backcountry days with Pig! 50 pounds of muscle doesn’t make for the best float so sometimes she gets a little help from @the_emertron to get through particularly soft sections (and carry her poop like in the last video, can you spot it?). Otherwise she’s a speedy little piggy!
Wait for it in the video... my two favorite fluffy white things finally reunited today! It was a much needed outing after a week of being sick. 🏂🐷🐶>>>🤧
Hoping the next decade involves more going off the beaten path to discover the goods, and less tipping forward in split mode while popping a squat and peeing on yourself a little as that also happened today. 📷: @the_emertron
Surprise powder day! Parents’ and little brother’s first scenic Colorado winter backcountry adventure! Pig! Today was full of gifts. Wishing the best to you and your loved ones on the last Christmas of this decade.
After two weeks at sea level and in a food coma, I’M BACK! Annnnnnnnnd so is my one true lovely cuddle butt!!!
%d bloggers like this: