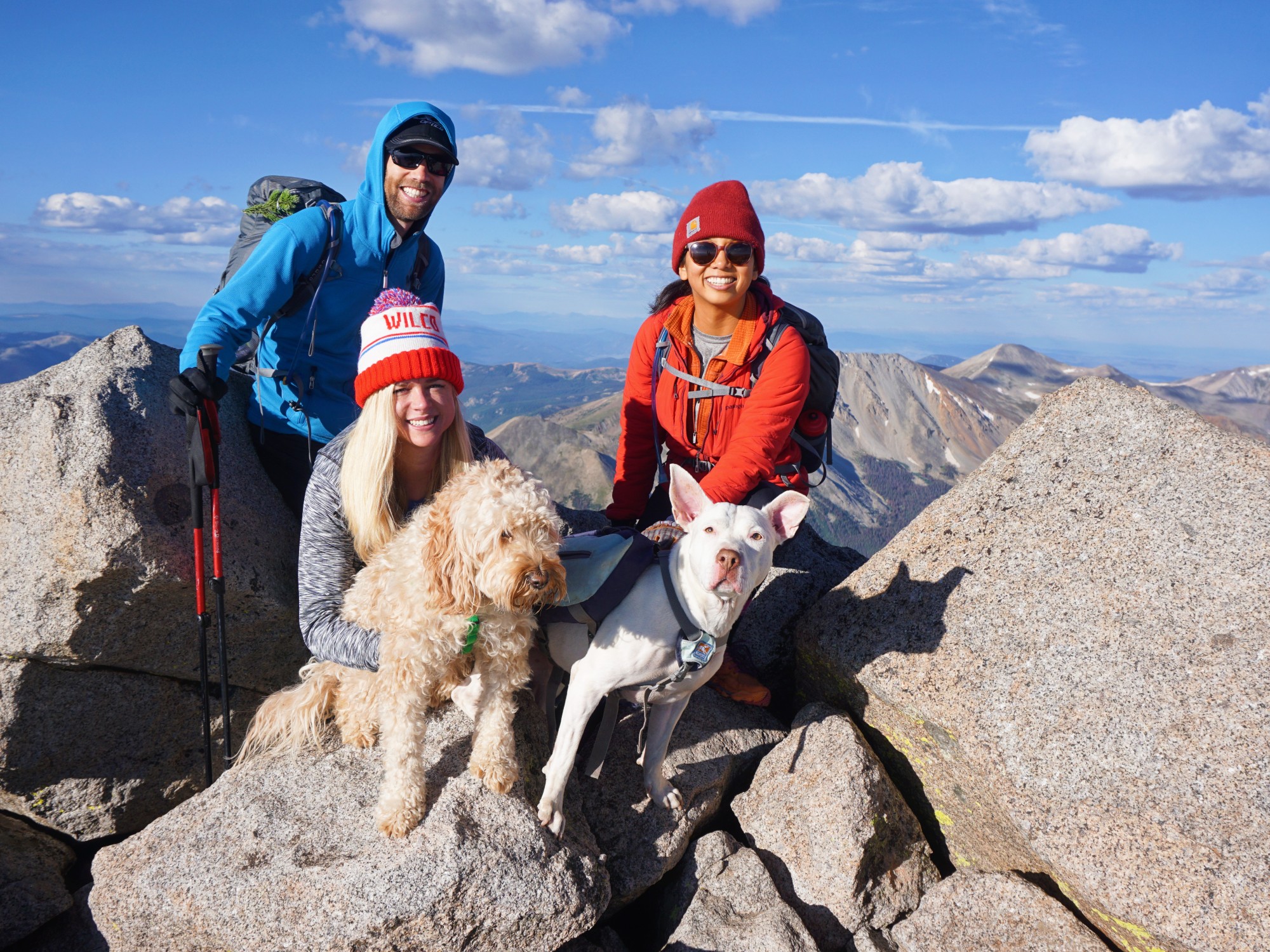 My favorite pose in yoga is Shavasana, the corpse pose, where one lies sprawled on their back quite literally like a corpse and does nothing. It is very relaxing, soothing, and, despite the similarity in their names, has nothing in common with climbing Mt. Shavano, a 14er that tops out at 14,232 ft.

We met up with our friends Camilla and Bean in the Dino Lots Friday afternoon at 4 pm and drove to the Shavano/Tabeguache Trailhead. We arrived at the big dispersed camping meadow a short distance down the dirt road from the TH a little after 8 pm, immediately set up camp, and started snoozing. (Side note: For those who want a head start on the hike or more remoteness, there are a handful of campsites along the hiking route about 1000 elevation gain from the trailhead)

Our alarms reliably woke us up and we set off from the trailhead at 4 am. We were following the East Slope route, which is 9.25 miles long with 4600 feet of elevation gain. The trail started to feel steep about half a mile in, but I couldn’t get intimidated by what I couldn’t see. With the dark obscuring what’s in front and around me, all I had to focus on was putting one foot in front of the other. This is one reason why I love hiking before the sun rises.

Catching sunrise, even if not from the top, is another reason. We got to treeline in a little under 2 hours, just as the stars began to fade into the slowly rising glow of the sun.

Soon enough, the sun broke over the ridge and lit up the valley below us… 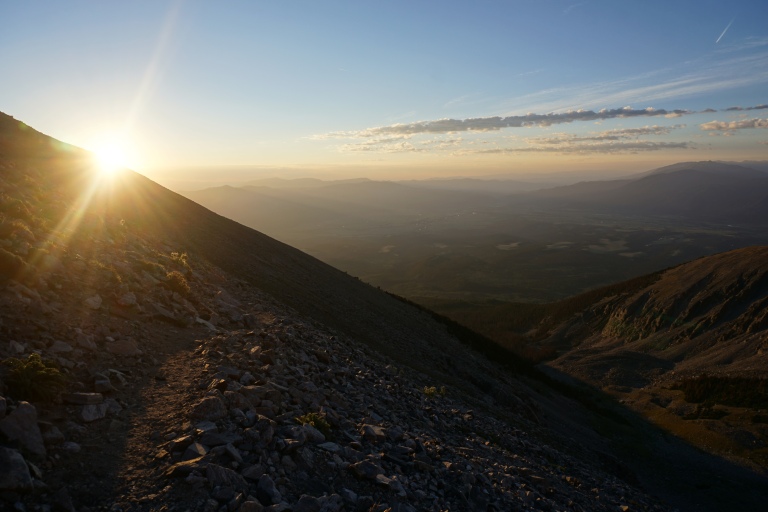 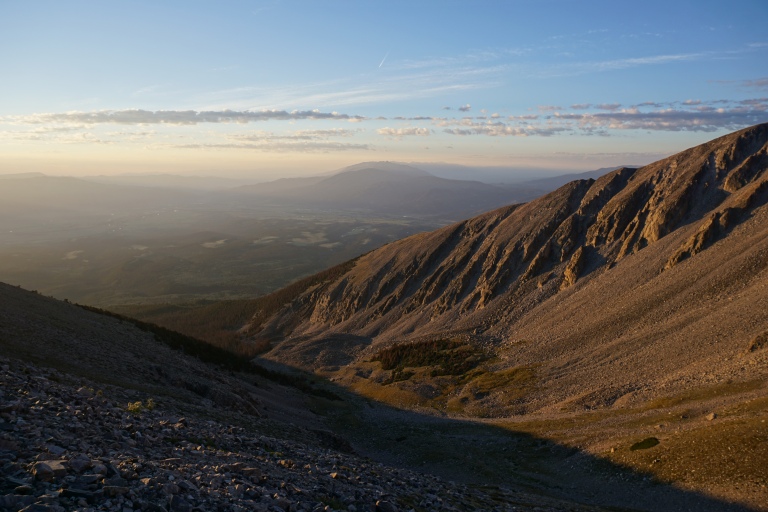 …as well as the daunting task before us. 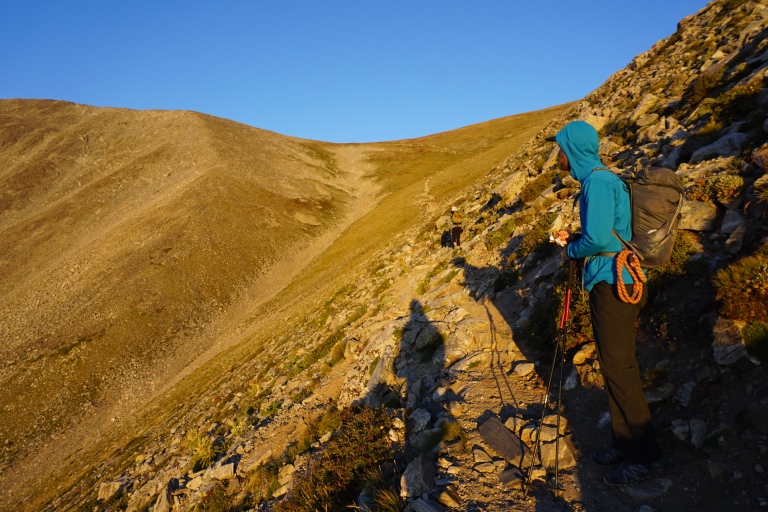 The trail to the pass became steep and loose. I made my way up with lots of tiny little duck steps (foot pointed outwards). Once at the top, we were rewarded with a mellow, flattish trail that headed to the talus field of Mt. Shavano peak.

Between where the grass ends and the peak laid a choose your own adventure kind of deal. Multiple faint trails offered to guide us up through the loose pebble field and we followed one that took us up looker’s left of the peak. The trail disappeared by the final ~700 feet of talus and we scrambled our way up by wrapping right around the ridge for a relatively more gradual approach. 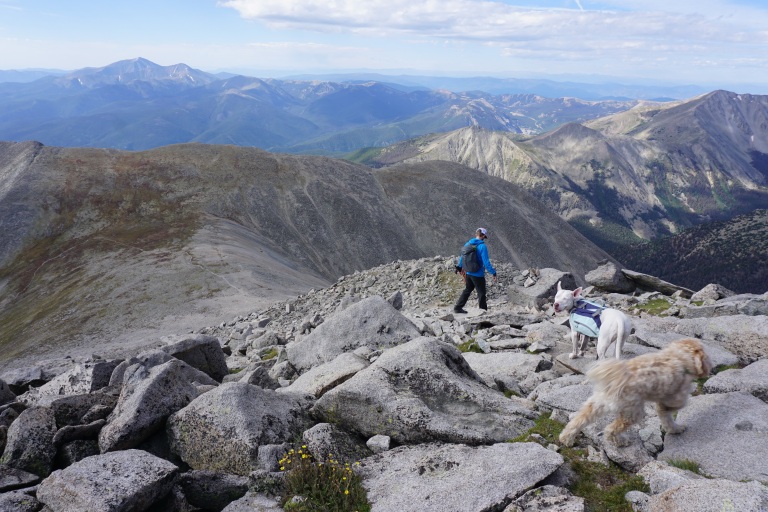 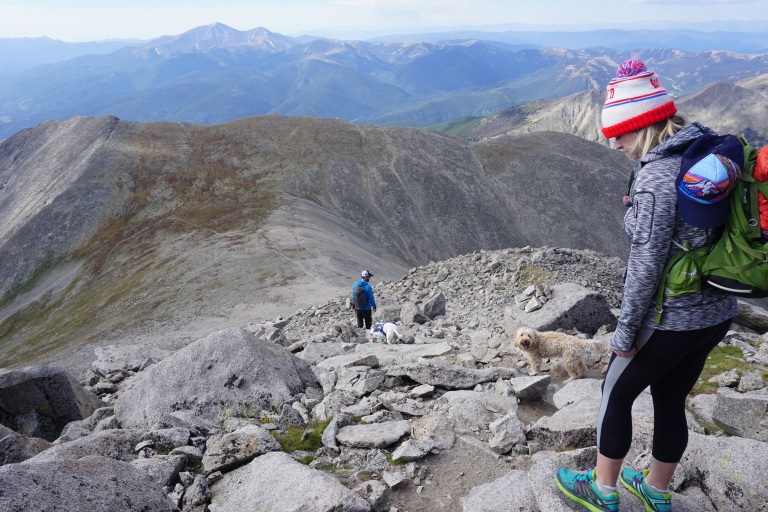 Before we knew it, there was nothing left to climb! So now it’s time for what this post is really about, doggy summit photos!!! 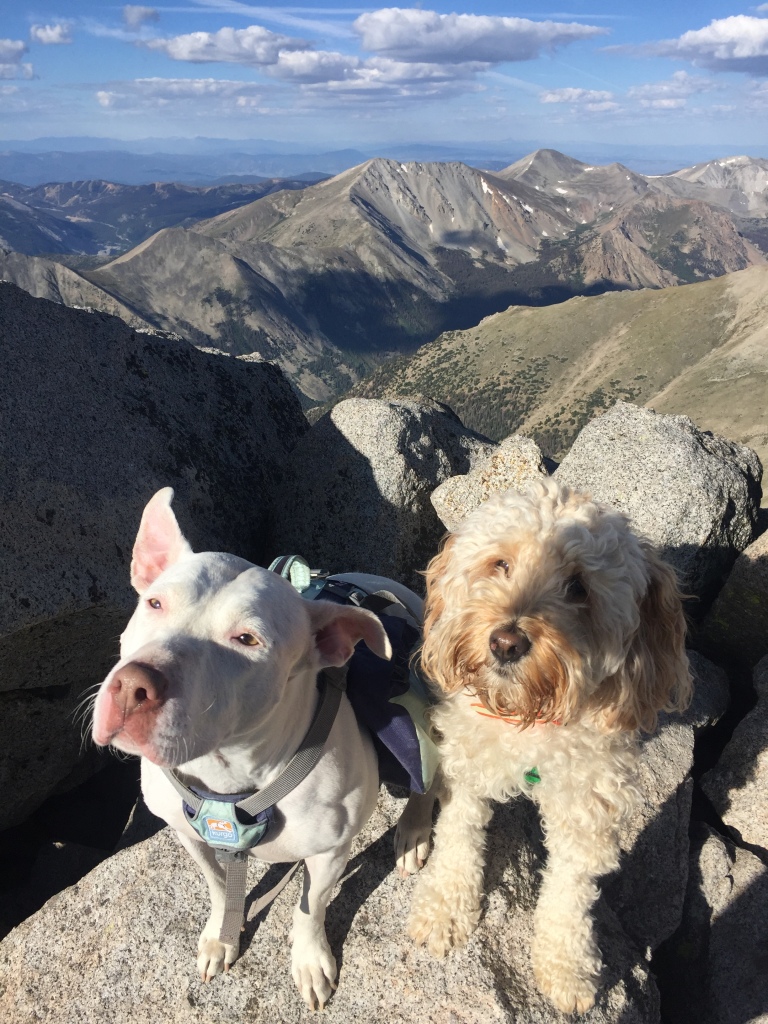 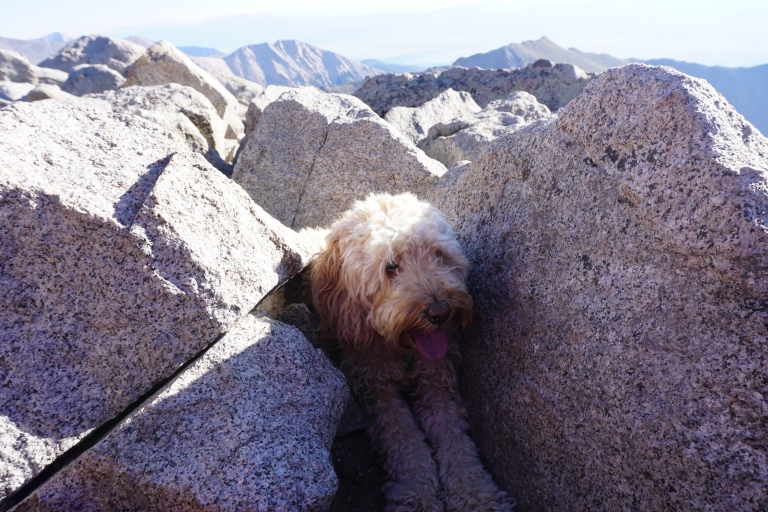 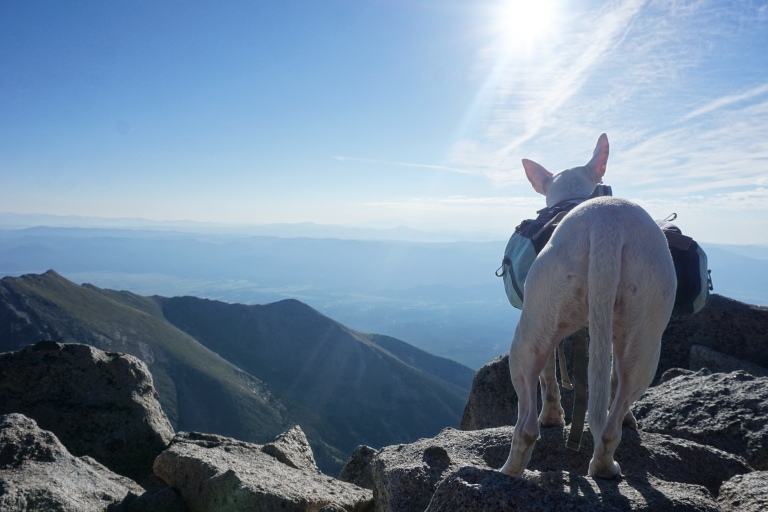 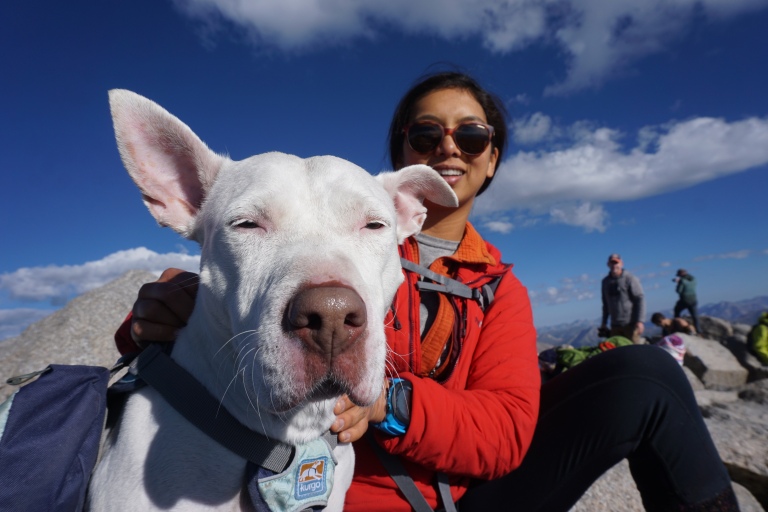 And some human ones too I guess. 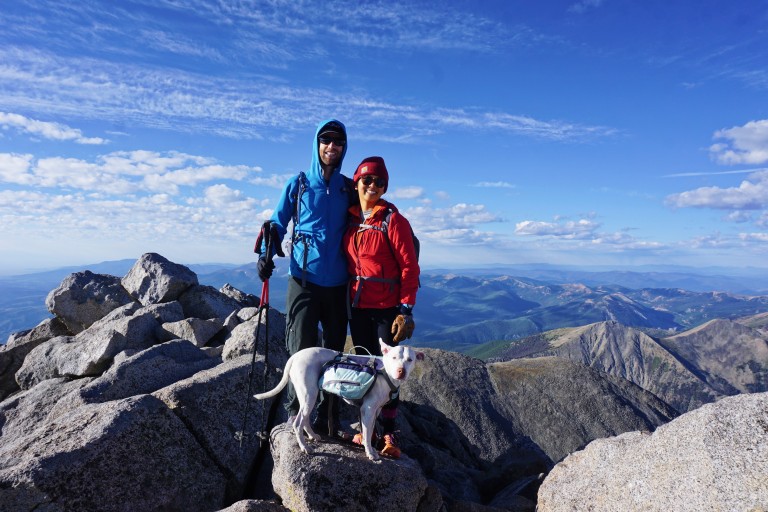 After snacking, we walked a little past the Shavano summit to check out the trail to Tabeguache. We already decided as a group not to summit it due to time restrictions. Still, it was a worthy short jaunt to more spectacular views.

The way down revealed just how steep the trail was. We all fell a few times maneuvering through the loose terrain. Slowly we made our way back into the trees. Save for a few wildflower fields, we didn’t encounter anything notable on the way down that we had missed on the way up in the dark. It was a slog back but most 14er descents are to me. Total time roundtrip was 8.5 hours for us, including the long break and Tabeguache scouting mission we had at the top.

Mt. Shavano proved a lot of more fun than I expected, having read about it being nothing more than an unspectacular pile of rocks. The hike has a lot of elevation gain but that’s mitigated by the dramatically steep sections never lasting very long. I also found the views 100% worthy of the hike’s challenge. As evidenced by the photos below, Mt. Shavano left us all very happy, very very tired, and very very very ready to be in corpse pose. Perhaps through this adventure, we uncovered the link between Mt. Shavano and Shavasana. 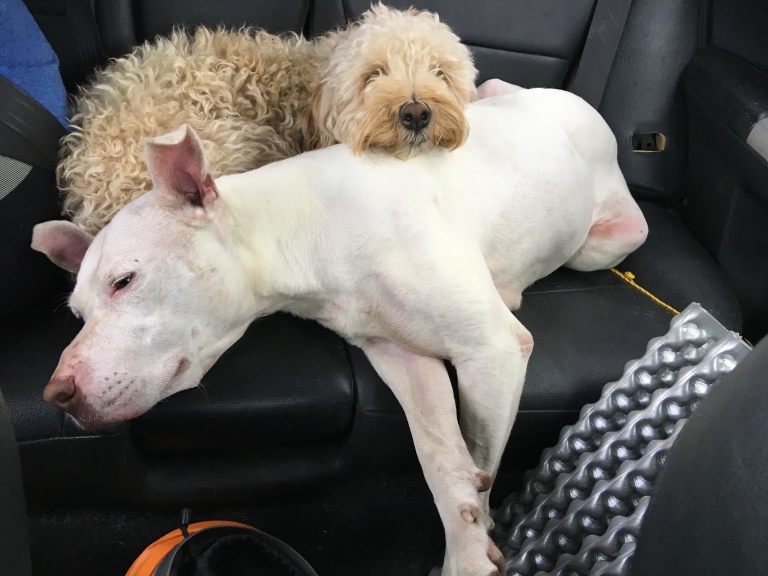 3 thoughts on “Mt. Shavano – Not to be mistaken with Shavasana”